Hit enter to search or ESC to close
All News

GRANT CITY, Mo. — The Worth County Care and Rehabilitation Center in Grant City has been approved for a low-interest, revolving $20,000 U.S. Department of Agriculture loan administered by Nodaway County Economic Development.

NCED Executive Director Josh McKim said Wednesday the loan funds will be used for development of an Alzheimer’s disease unit that will provide round-the-clock, long-term medical treatment for dementia patients.

He explained that his agency’s involvement came about because of its three-year relationship with the federal program, which has resulted in similar loans that helped establish Maryville’s Pizza Ranch restaurant on the east end of town and William Coy’s Farm to Table Restaurant at city-owned Mozingo Lake Recreation Park.

McKim said NCED set up the program on five-county basis because regional projects receive more favorable consideration from USDA. He added that the care center loan is the first such NCED request to be granted outside of Nodaway County.

Other counties attached to the region served by the program include Atchison, Gentry and Holt.

“We are more competitive if the program is regional,” McKim said. “Also, we are the only agency in the region with revolving loan experience.”

The project’s potential impact is expected to include 12 full-time jobs and an annual payroll of $360,000. When complete, the unit will also increase northwest Missouri’s Alzheimer’s care capacity by an estimated 14 percent.

“In Worth County we’re very excited about this partnership with NCED as it gives us the ability to provide a much-needed service to the region,” Autin said. “This expansion of Worth County Care and Rehab will make it one of the premier care providers in the region.”

Alzheimer’s disease is an incurable loss of memory and self-awareness that strikes one out of eight Americans over age of 65 in various forms.

According to the Missouri Alzheimer’s State Plan, 110,000 Missourians are currently diagnosed with the disease, a figure expected to reach 130,000 by 2025.

USDA’s Intermediary Relending Program provides low-interest loans to local non-profit agencies that, in turn, re-lend the money to businesses in an effort to spur economic development and create jobs in rural communities. 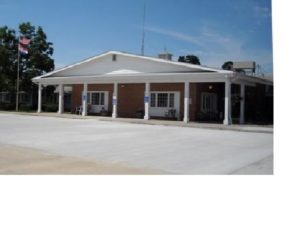 Pictured is the Worth County Care and Rehabilitation Center in Grant City, which has been approved for a $20,000 low-interest loan through the U.S. Department of Agriculture for creation of a 16-bed Alzheimer’s disease unit. The loan is being administered by Nodaway County Economic Development, which helped secure similar funding for Maryville’s Pizza Ranch restaurant on the east end of town and William Coy’s Farm to Table Restaurant at city-owned Mozingo Lake Recreation park