Hit enter to search or ESC to close
All News

By PHIL COBB The Forum

MARYVILLE, Mo. — United Fiber, a subsidiary of United Electric Cooperative, announced at a luncheon on Tuesday that it will expand its gigabit internet, voice and video accessibility to include all homes and businesses within the city limits over the next eight to 10 months. Currently, United delivers services to 222 residential and 205 business subscribers in Maryville.

United invited key stakeholders to a lunch meeting at the Mozingo Conference Center, where it announced that it will begin the next phase of its fiber build-out in August with hopes to be completed by the summer of 2020.

According to Darren Farnan, chief development officer for UEC, plans are for Sellenreik Construction of Savannah to begin work in what they are calling the west central part of Maryville in the area of West First Street and continue in a clockwise direction, including six separate construction zones. Connections are to be made available at the completion of each zone.

At the meeting Jim Bagley, CEO of United Electric Cooperative, recognized UEC employees and those present for making the project possible.

“There is no government money involved in this build-out,” Bagley said. “This is 100 percent privately financed.

“These projects have to pay for themselves and this one will.”

Bagley touted the importance of the project not only now, but down the road.

“With fiber we can expand to whatever the broadband needs are in the future,” Bagley said. “We’ve been here over 80 years and we plan on being here for another 80.”

Maryville mayor Rachael Martin was on hand and talked about the importance of reliable high-speed internet to future growth of the community.

“As education, agriculture and health care are pillars of our community and greatly impacted by the availability of high-speed fiber internet, we are fortunate to have a partner in United Fiber,” Martin said. “I look forward to seeing fiber transform our community by strengthening business, driving new business and increasing civic engagement.”

Farnan then told the group about how his company stands out from other traditional internet service providers.

“Pretty much every decision maker in our company is sitting in this room today,” Farnan said. “That’s really the difference we bring.”

“We feel like this is just the beginning,” Farnan said. “There are so many things that, as Jim said, that we can’t foresee, that we wouldn’t have seen five years ago with the bandwidth requirements that we’re seeing today and we know that’s just going to expand more and more as we advance.

“With having fiber here, it’s going to benefit the community.”

For example, in addition to providing faster and more reliable internet, Farnan said national studies have shown that fiber internet to a residence can increase home values by $3,000 to $5,000.

Since 2011, United Fiber has constructed more than 1,700 miles of fiber and now serves more than 8,000 residential customers. Its commercial customer base has grown from 387 in 2016 to more than 1,400 currently.

United also announced at the meeting that additional funding through Connect America Funding II will allow the company to expand its rural footprint, staging the company for additional community and cooperative opportunities in the future. 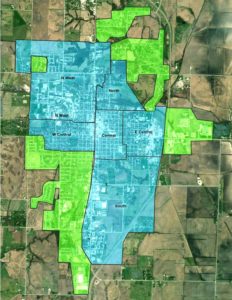 This map image provided by United Electric Cooperative show the six construction zones to be completed by United Fiber in the Maryville city limits. The green color indicates areas in which United Fiber is currently available. In August, the company plans to begin construction in the west central part of town and advance in a clockwise direction, making connections available to residential and commercial customers at the completion of each zone.